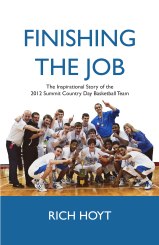 Rich Hoyt documented one of the great basketball stories ever told in Finishing the Job: Rob Hertzel was a 1981 graduate of The Summit Country Day School in Cincinnati, Ohio. During Rob’s junior season, Summit lost a heartbreaking overtime game in the 1980 Ohio Class A Basketball State Championship. Rob was diagnosed with stage-four colon cancer in February 2010. Rob would go on to live his life for the next 21 months much like he lived the previous 46 years, with a passionate zest that inspired those around him. He served up daily motivation to hundreds of people through an online blog, until he succumbed to his battle with cancer on November 11, 2011. Rob’s middle child, Holden, was beginning his senior season as the starting center on Summit’s basketball team at the time of his passing. With Rob serving as inspiration for both Holden and the entire team during the 2011-12 season, The Summit Country Day boys’ basketball team went on a magical run to claim their first state championship in program history.

Rich Hoyt’s powerful story of Rob Hertzel and Summit Country Day boys’ basketball state championship season in 2012 is genuinely and honestly interwoven with details of not only sport but the human condition. With poignant descriptions of conversations and thoughts from those around the Hertzel family, the reader shares in Rob’s journey after his diagnosis through accounts of his blog.
Rob’s journey ended physically November 11, 2011, but his significant legacy was clearly present to the team in Columbus. This book will undoubtedly impact the lives of those who read it and it’s a story worth sharing for any basketball fan.
– Mike Dyer, High School Sports Reporter, WCPO.com; former High School Sports Reporter, Cincinnati Enquirer

Every team that wins a state championship has a story, and Rich Hoyt tells this one with compassion and insight. Finishing the Job is about much more than just points, rebounds and defensive stops. It’s about a man whose legacy inspired a team to achieve the ultimate. That man lost his life, but he left memories that will last a lifetime.
– Tony Meale, author, The Chosen Ones: The Team That Beat LeBron

Pages 65-66
In Rob’s last moments something struck Cindy. This was it. This was the celebratory moment for which Rob had been waiting. Rob needed champagne poured over his head. She wanted to be able to do it at Rob’s “I Beat Cancer” party, but that was no longer possible. Cindy sent Anna to get a bottle of champagne that they had in the house.

Watching the game (NBA Finals between the Boston Celtics and Los Angeles Lakers) last night reminds me of one of my life goals. I have always wanted to achieve something great enough to warrant getting champagne poured on my head. That always looks like it is just the greatest feeling.  Once we get through this, will someone please do that to me? It will make my life complete.
(Rob Hertzel, June 18, 2010)

And as Rob breathed his last, Cindy poured the bottle of champagne over the head of her husband of twenty years.

Page 131
As he continued to bask in the moment of the victory, Bradley told Holden to find Cindy and Chris Hertzel. He wanted to give them the chance to cut down a piece of the net, something Holden’s father narrowly missed the opportunity to do 32 years earlier, and something that he missed watching his son do by less than five months.

“I always wanted to include them,” Bradley said. “What a year it was and how much of a toll it has taken on everyone. Giving them a moment of happiness was a big deal to me.”

Among a couple dozen Summit fans that had made their way down to the Schottenstein Center court level after the game was Bob Juenke. He stood proudly, with a huge grin, behind the Summit bench as the nets were being cut down. While cutting her piece of the net Cindy cut an extra one. She came down from the ladder, walked over to Juenke, and presented him with that piece.

After the most traumatic event of his young life, Holden was enjoying the greatest athletic accomplishment of anyone from his competitive family. That said, not lost in his excitement after the game were thoughts of his father.

“Personally it’s one of the happiest moments of my life. My dad got here in 1980. They were state runners-up. They lost by two on a buzzer beater. So to come here is kind of like ‘finishing the job.’ And doing it in his memory is the coolest feeling I’ve ever had in my life,” Holden said.

Listen to the online broadcast of the 2012 OHSAA Division 3 State Championship:
http://summit.localsportsradio.com/articles/page.imp?articleid=4405&pubid=49